In the past week I have had the pleasure of attending two events at the Research Institute for Media and Cultural Economies (CAMEo) at the University of Leicester: Literature, Writing and the Creative Economy on 24 Feb and Co-working Dynamics and the City on 1 March. The themes of both events do not immediately appear to relate to my PhD on artists and expertise, however now that I am approaching the end (I am due to submit this September) I am beginning to think of ways in which I could extend my research or take it in new directions. Both of these events were incredibly useful for that.

Literature, Writing and the Creative Economy

I was interested in this event for a variety of reasons – the opportunity to discuss ideas in a workshop, the fact that a couple of my PhD participants are writers, but mostly because there was going to be a talk by Claire Squires (pictured above) on diversity in the literary economy. Diversity is a theme which I’m sure will influence much of my future research; I’m particularly interested in diversity and expertise. Claire highlighted the entrenched inequalities in the publishing industries around race, class and gender. The most striking point for me was even though the publishing industry is made up mostly of women, men get paid 16% more. Clearly, more men are in ‘expert’ positions in publishing, so what can be done to address that imbalance? (I’m well aware that gender inequality affects most industries).

Claire also highlighted some of the efforts to build diversity in publishing (such as the Jhalak Prize) yet at the same time publishing industry norms continue to reproduce and play up to stereotypes, using this example from Anamik Saha’s work on the rationalising/racialising logic of capital in cultural production. The book covers all depict variations of Asian stereotypes, mainly involving veiled women and the Taj Mahal. This example made me wonder how conscious publishers are that they are adhering to such stereotypes, whether there are guidelines and templates they follow without questioning them, and whether deadlines and workloads constrain their ability to do anything differently?

Rick Rylance discussed the literary economy, revealing that it is among the largest in the world, generating £2bn of the £10bn from the UK’s creative industries annually. He suggested that the literary economy should not be thought of as ‘special’ and a marginal activity, it is very much mainstream. Barriers to access were mentioned and particularly the ‘internship culture’ of the creative industries as one of the contributing factors towards a lack of diversity in publishing at least. Someone in the audience pointed out however that government efforts are too focused on a career ‘pipeline’, which is too linear and not reflective of creative careers. This resonates with my own research in that many of the artists I interviewed went into art and writing as a career change, once they had made enough money in another job to begin a career in cultural work. This is interesting in itself and could be one area for further exploration.

The main takeaway from this event was that though it is a huge industry there are stark inequalities in publishing. As academics we need to think of ways to address this. I think the internship culture does not work – it is not viable for working class people who cannot afford to work for free and it contributes to the class inequalities in the cultural industries. One person suggested apprenticeship schemes instead, which is a potentially more appealing solution because at least people won’t be working for nothing (or next to nothing). I suggested to my workshop discussion group that diversity is linked to social justice – and until wider societal injustices and inequalities are addressed, a lack of diversity will continue to be a feature across the cultural industries.

Co-working Dynamics and the City

I have maintained an interest in co-working and collaboration during my PhD and have written a chapter in a forthcoming book about collaboration, so this event held much appeal for me. The keynote was Melissa Gregg (above) of Intel, and author of Work’s Intimacy (2013) among other publications which have had a huge influence on my own work. Melissa discussed the increase in temporary and contingent jobs in the USA and Europe, and how co-working spaces look to support the ‘digital nomad’. She identified initiatives and forms of co-working in the USA and around the world, and also discussed the ‘gig economy’ (e.g. Uber, Air BnB), crowdsourcing (Amazon Mechanical Turk) and digital freelancing (Upwork) are all a part of flexible yet highly contingent ways of working. Most crucially, Melissa mentioned how some co-working spaces harvest user data, to build user profiles and help determine which ‘type’ of worker they should market their space to.

Melissa’s presentation set up the themes and discussion for the rest of the day extremely well. There were presentations about community and co-working spaces, how co-working space managers act as curators and mediators, (both for me raised questions about diversity and barriers of access to co-working spaces) and some specific examples of co-working initiatives from Birmingham and Leicestershire. What struck me most were the parallels between artists in art studios, and co-workers in these spaces. I was reminded of Angela McRobbie’s (2016) point that nowadays, the cultural worker (the artist) is the model for all workers – self-managing, able to handle precarity, flexible, adaptable and so on. Tied in with the self-management ethos is the growing emphasis on productivity exacerbated by the freelance economy and encouraged through productivity apps to ‘get things done’ as highlighted by Melissa Gregg (2015).

McRobbie argues that the self-management ethos is symptomatic of neoliberal capitalism – the state’s way of placing all responsibility for work and life on the self, so that welfare support can be withdrawn. While those are the similarities between the artist and freelancer, I see similar parallels in terms of space – between the artist studio space and these co-working spaces – they both appear ‘open’ to ‘anyone’ yet can be exclusionary, they can be sites of collaboration, they can be a place to go for people and a marker of ‘professionalism’, there are cost implications and they can have a certain aesthetic designed to appeal to a certain type of person. Like the artist is the model worker, the studio is the model space, and both form the beacon of neoliberal capitalism’s ideal worker and work situation – precarious, flexible and self-managing. 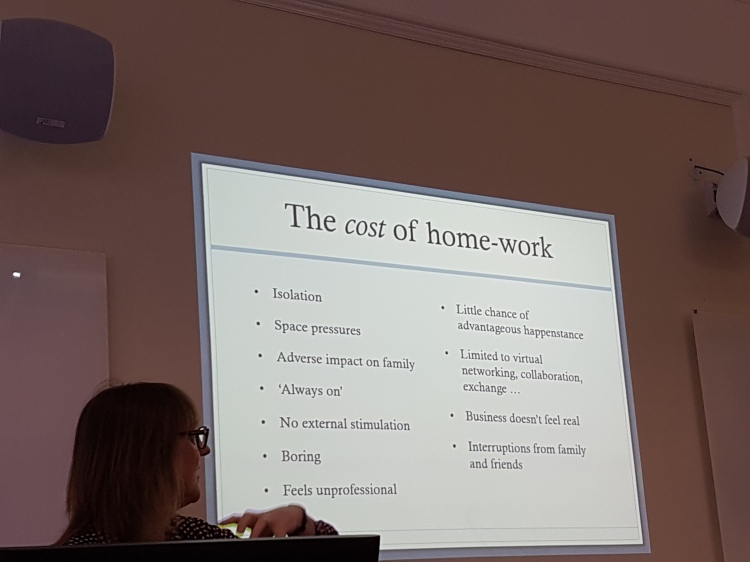 In the final talk I found many crossovers with my own work. The presentation by Carol Ekinsmyth (above) on home working resonated with the experiences of the women artists in my research. She discussed home working as increasingly ‘the norm’ as a way of working yet there is very little support for home workers, even less than those in co-working spaces. Carol identified how women home workers in particular experience extra challenges when trying to negotiate childcare with work – experiences also felt by some of the artists in my research. I had come across Carol’s work on ‘mumpreneurs’ previously so it was good to see her talk about her more recent research.

The themes and issues raised in this particular event have inspired me to think about giving a paper on co-working/collaboration and expertise at my University’s upcoming research conference, RESCON.

McRobbie, A. (2016). Be creative: Making a living in the new culture industries. John Wiley & Sons.